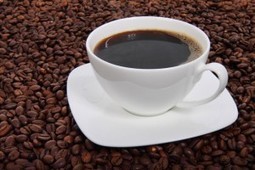 Blog post at Budget Earth : I will be one of the first to admit it – I have a coffee addiction. For a long time I wouldn’t even get up in the morning if my husband [..]

I love coffee.  I love the way it smells, tastes and gives a pep to my step so early in the morning.  By the way I think I need another cup, LOL.  Usually I drink one 16 oz. cup of coffee made on my Keurig first thing in the morning with my breakfast.  I can’t have it alone or I’ll get the super jitters.

One side effect of drinking coffee and consuming caffeine in general sent me into an emotional tailspin a few months ago.  I found a fairly large lump in my right breast.  It was about the size of my thumb and right around the outer edge.  For a few years I didn’t even bother paying attention to the lumps and bumps because breastfeeding made my breasts feel like very knotty and swollen.  After the mammary glands stopped filling and swelling and leaking I was left with some odd textures there, but nothing too worrisome.  That was until one day six months ago.

I was sitting at my desk and all of the sudden I had a sharp pain on the outside of my right breast.  When I felt the side of my breast I found the lump and instantly my heart fell.  For quite some time I just ignored it but then with strange and irregular mentrual cycles and continued and increasing pain I broke down emotionally.  The thought of going to the doctor was mortifying.  My thought was what if I find out the worst, what if I have to loose my breast, my hair, and most horribly of all my life.

I did research on the Internet to find what could possibly be causing the lump and found all kinds of information on fibroids, cysts and fatty tumors in addition to the dreaded cancerous tumor.  At my age, early 30s, I was hoping very much that it was a fibroid, cyst or fatty tumor that will typically dissolve over time.  During the research, I found out that consumption of caffeine from coffee, chocolate and soda for whatever reason leads to suspicious lumps in breast tissue.  Still I was reluctant to go to the doctor to make sure the lump was innocuous.

My dear DH didn’t know what to do about my emotional slump and finally called my mother and asked her to convince me to go to the doctor for peace of mind one way or the other.  She called me, told me she had experienced the same thing when she was my age and that it eventually went away.  After I agreed to make the appointment my emotional state settled and much to my surprise the lump shrunk.  It was still there, but it was definitely smaller.  I need to keep that in mind – bottling things up and not dealing with them just makes them worse (sometimes even worse than they ever should be).

The doctor did believe the lump was a bit worrisome and sent me for an ultrasound.  Much to my comfort the ultrasound found that the lump was nothing more than bunched up breast tissue and fat.  So there the lump remains.  It hurts at times, but I still drink my one cup of coffee.  What I’m trying to do to reduce the chances that it will grow again is exercise more, eat more vegetables and try not to get so stressed out.