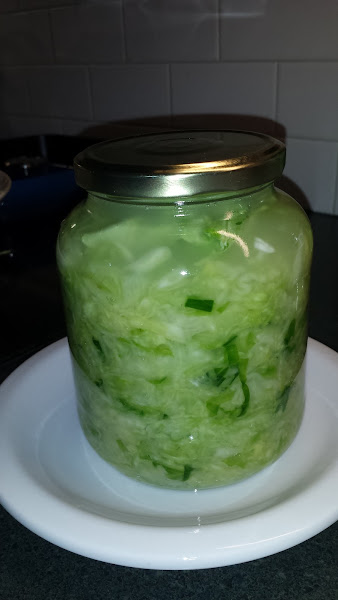 Soon to be sauerkraut / Google Photos

Since my first foray into natural fermentation techniques I’ve been wanting to try making sauerkraut.  It had always been said to me that the process was really simple, yet I felt a bit intimidated by the thought of allowing food to sit on my counter to ferment. The history of food and natural preservation techniques finally was enough to convince me to overcome my fear and plunge forward into this new-to-me yet ancient tradition.

Jill Winger’s website, The Prairie Homestead, has a plethora of recipes and instructions for those interested in trying lacto-fermented vegetables and homesteading in general. (Click here to view more details) I used their recipe for sauerkraut and with a truly organic cabbage from my mother’s garden I was ready to move ahead.

First I started by removing damaged or wilting outer leaves, cutting out the core of the cabbage, quartering the head and slicing it thin using my mandolin.

My daughters wanted to help out so I split the sliced cabbage into 2 bowls and sprinkled 3/4 tbsp. refined sea salt on each half.  Then I allowed them to squeeze, mash and pummel the cabbage for 10 minutes until it was much reduced and an fine brine was produced.

10 minutes and all the mound of cabbage is wilted and ready.

To my surprise the entire batch of cabbage and most of the brine fit in one quart jar. My grandmother (via my mother) gave me an old wooden pestle from a conical sieve set that I used to press the cabbage into the jar.  Just drop it in little by little pressing down with each turn to make sure it all fits and is under the brine. I didn’t have any special lids to fit an airlock into so I just fit a clean, folded up outer cabbage leaf on top of the kraut to weight it down a bit and then set the lid on finger tight making sure all the cabbage was under the brine.

I started out with the rib of the outer leaf pointing up, but I noticed an air bubble forming underneath so I turned it over to better press down the shredded cabbage.

Hand tightened lid and ready to go in the dark cabinet. It’s on a plate to catch any leaking brine.

Every day I had to “burp” the jar to release excess pressure since I wasn’t using an airlock.  After one week I tasted the kraut and it was super salty, but not sour enough.  Two weeks passed and it was not bubbling anymore, but my hope was the lactobacillus would continue to sour the mix. Yet again it was salty, but not sour yet it still had a good crunch and body to it that made me happy. It did though look as though the kraut was starting to expand above the brine so i rigged a little plastic condiment cup to fit inside the narrow mouth of the jar by cutting off the rounded edge and poking holes in the bottom.  This allowed me to fit is snugly under the lid of the jar to press the cabbage under the brine and jar would still close  Yesterday marked week three.  Though I’m sure the portions of cabbage I removed from the top were OK – didn’t smell bad – they looked weird and were browning.  It was a little frustrating to taste only salt again.

So, I did a little searching – Why is my sauerkraut too salty? I found the site Make Sauerkraut! There are tips on how to troubleshoot or understand perceived issues with a cabbage fermentation.  The first tip was to add a little water and mix it well to reduce saltiness and the last one was to allow it to ferment longer.  So. . . I’m combining the two.  I switched the ferment to a new jar, added a little more water and mixed it well then fit the little plastic condiment cup in again and sealed it up for probably one more week.  People used to, and probably still do, ferment pounds and pounds of cabbage in large ceramic or wooden crocks that they’d eat from for months without additional refrigeration.  Granted, what comes out of the bottom of the crock will probably be super sour, but it will also be replete with probiotics.  We’ll see what happens this next week.  Either I’ve solved my salty/sour ratio or I’ve tanked the whole batch.  At least it’s just one head of cabbage. 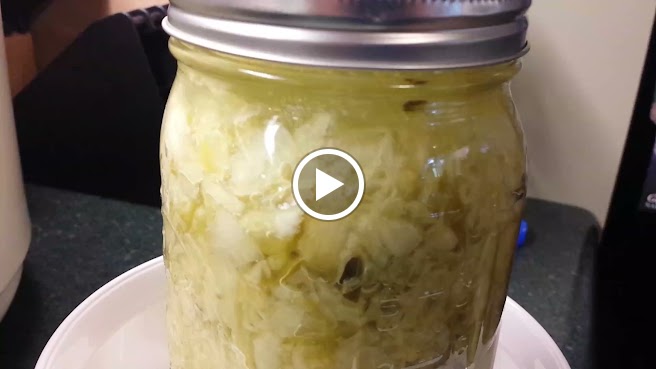 After 3 days or so I noticed the jar of kraut had begun to bubble again.  Woo HOO!!! Today marks 4 weeks total and one week since I re-jarred the batch.  The pressure steadily builds inside the jar and I have to burp it at least once if not twice a day.  This morning when I loosened the cap a bit it bubbled over a bit and it gave me a chance to taste the brine without totally opening the jar.  Lo and behold. . . IT’S STARTING TO TURN SOUR!!!  The batch is finally starting to taste like sauerkraut and not just salty cabbage.  I’m going to leave it at least another week, maybe two, to get it good and sour.  So far the bubbling doesn’t seem to be subsiding at all so my guess is the delay from being too salty in the beginning is now starting to actually ferment.  Hopefully, by the end of six weeks we’ll have a tasty batch of probiotic kraut for bratwurst and Reuben sandwiches or pork roast, yum!

END_OF_DOCUMENT_TOKEN_TO_BE_REPLACED

Winter was a bit of a bust here in the Midwest.  Not much snow to cover the grey and brown outside left me yearning for Spring.  It’s finally here in Northwest Ohio, though we are having cooler than normal temperatures…